Weights are an integral part of fishing and have become very specialized over the years following technique development. The main styles of weights often include Bullet, Bell, Drop Shot, Spilt Shot and Egg. Understanding what weight applies to which technique will aid in setting up your baits properly. 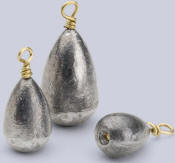 Bullet – Just as the name implies, these weights were designed for Texas rigging soft plastics and are bullet shaped with a hole in the center of them in which the line is fed through.

Bell – Bell weights look like a tear drop and typically have a brass ring on the top of them.

Split Shot – Split shot weights are a round weight that have been “Split” down the middle and opened so that the line can be placed in between the halves and then the weight can be squeezed together thus compressing itself on the line and staying in place.

Egg – Egg Sinkers are shaped exactly like an egg (Obvious name choice) and have a hole drilled through the middle of them.