Spinning reels which are often mistaken by name with spin cast reels are the only reels that have a completely open face that is maintained by a bail arm and line roller. Spin cast reels on the other hand feature a cover over the spool and although they technically spool the line the same way as a spinning reel they are in no way as efficient when it comes to drag quality and casting distance. 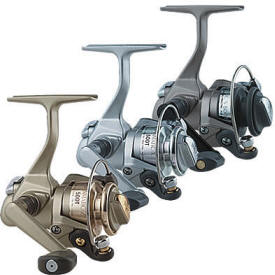 Important features to look for when thinking about spinning reels involves their line range and the quality of the parts. Let your technique determine whether or not a spinning reel is the right choice for you. Any technique that involves using lighter pound test lines from 2-10 will work extremely well on a spinning reel. If braided line is your choice, 8-20 pound braid will also work well.

Sizes on spinning reels are almost universal with the number system being used and often times you can find sizes ranging from 500 (ultra light) all the way up to 10000 plus which are the saltwater versions. In most instances 2000 or 2500 size reels are the most common since they can hold around 180 yards of 6 pound test.

The drag assembly on spinning reels uses simple downward pressure on a set of washers that are in the center of the spool. There are two types of drag available, Rear Drag – which puts tension on the spool from the bottom of the reel, pulling on the spool shaft (often found on lower end reels) and Front Drag – which involves direct downward pressure on the washers that are located in the spool’s center… this system allows for micro adjustments and is found on all top end reels. The drag washers can also be cleaned and changed easily.

Key features that will ensure years of trouble free service can include a waterproof drag assembly, sealed anti rust bearings which have dust covers over the guts of the bearings giving them years of operation, durable gearing materials, aluminium spools rather than graphite which tends to warp in temperature changes and a maintenance port for easy greasing once a year.