Spin cast reels are easily recognized since they have a covered face which always has a tiny hole in the center for which the line goes through. Spin cast reels are very easy to work and excel for use with children and newer anglers. Their main purpose is to act as a lighter presentation reel since many of the features will not handle a bigger fish or even heavier lines. Line ranges for these reels can be from 2-8 pound test and they work best 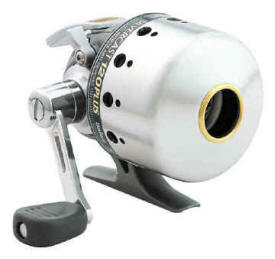 with monofilament lines. Fluorocarbon lines have too much stiffness and braided line’s lack of stretch can easily break the smaller more fragile parts.

The reels work on the fact that a small pin, which is directly related to the push button on the outside of the reel, protrudes trough a spool cover and it winds the line onto the spool in a 90 degree angle. When the button is pushed this spool cover pops up and the pin retracts making casting possible. Common problems involve the lines becoming uneven on the spool and eventually getting tangled underneath which involves a complete disassembly. Common causes for this often involves over filling, too heavy of a line and most often old line with too much memory.

Drag systems on these reels are suspect at best since there is too many friction points and a 90 degree turn to contend with and unlike the spinning reel which uses a line roller, spin cast reels have no such bearing or roller so the line is always rubbing on the casting pin.