Man-o-man – what a year it’s been! I am sitting here in my office writing away and it seems like our summer has just shown up. Between you and me, it’s 9 am, and as soon as this is finished up I’ll assure you I’ll be running so fast to get on the water that my wife will think SUBWAY® has a new 30” sub! Anyways, that’s beside the point…I am suppose to be here to try and give you a few things to help you catch a couple more largemouth -not let you in on my eating habits. 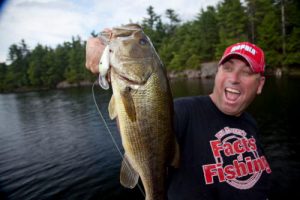 So, here in Ontario our season begins at the end of June and the largemouth have normally spawned, recouped and begun to put the feedbag on. That means our season is fairly consistent in terms of the mood of the fish and there location, but, if you think you can just head out flinging the same bait at the same water and load the boat every time, you have better give your head a shake. You need to be ready for different situations and be willing to change, because trust me, the last thing you want to do is get stuck doing the same thing all year while watching the guy across the lake catch fish after fish. Throughout the season there are a few techniques that you need to know and experiment with until you find the one that proves most successful on the particular day you get out.

The first thing I like to do when I get out on any lake is search out what cover that lake has to offer. Largemouth are cover oriented fish so look for areas with wood, trees, rocks, weeds and docks. These are going to be the most likely places that the fish are going to be. Once I know what cover is available the first thing I do is to try and cover as much water as possible with a fast moving bait, like a crankbait, topwater or spinnerbait. What this allows me to do is put my bait in front of as many fish as possible and create a reaction strike, meaning the fish doesn’t really want to eat the bait, but reacts out of instinct and grabs it when it comes through the area. Kind of like if you were to pull that 30” sub across my desk right now, I’m not all that hungry but would probably grab it. One of the new baits that have really amazed me for this type of fishing is Rapala’s DT Thug crank bait. This bait has a crazy aggressive wobble and seems to just eat its way through the weeds and around wood and rock. It’s a great tool to cover tons of water not only to find areas that seem to be holding fish but also eliminate lots of unproductive water. One of the biggest mistakes I see anglers make is spending too much time in unproductive areas. Use a fast moving bait to help you find the fish then expand on those areas you’ve found with slower presentation.

Ok, so you’ve covered some water and caught a few fish, or during your search you’ve found a great looking area where you feel there should be some fish around. Now it’s time to really slow down and begin working the area. Fish aren’t like people, they don’t have hands to pick things up and move them out of the way. So if you make repeated casts with slow moving baits a lot of times those fish will get ticked and eat your bait just to get it out of their face! The first thing I reach for in this situation is a soft plastic stick bait like a Berkley Power Sinkworm in a watermelon or green pumpkin color. This bait is heavy enough to cast super far but has that powerbait scent and a super slow tantalizing fall that ensures that fish will come check it out. My favourite way to rig this bait is wacky style, taking the worm and a small round bend hook like Eagle Claw’s Wacky Rig hook and hooking it right through the middle. This really makes the bait come to life with each twitch of the rod and most of the time proves irresistible to bass that have passed up other offerings.

When it comes to techniques like this I meet a lot of people that try to force tossing these lighter baits on bait casting equipment because the stereotype is that spinning gear is to light to handle giant largemouth. This couldn’t be further from the truth and when I am using techniques like wacky rigging or even Texas rigging a sinkworm around heavy cover, I will always have it tied on a spinning rod and reel. This allows me to make deadly accurate casts and even skip these lighter baits way up under docks and trees to where the big boys hide. One of the things I have been most excited about for this is Shimano’s new Stradic CI4 reel. These spinning reels are so light they seem like they’re not even there and strong enough to pull even the biggest bass through the jungle! Pair that with a 6’8” medium to medium heavy Cumara rod and spool the reel up with 20 to 25 lb braided line and you will never question the power of a spinning rod again.

That being said there are definitely times during our season when you need to break out what I refer to as the “big stick”; a 7 ½’ or longer flipping stick spooled with at least fifty pound braid. When we get into the dog days of summer the largemouth on any given lake will take shelter in the thickest cover and the only way to get to them and pull them out is with heavy tackle. One of my favourite techniques is to look for the thickest most isolated pieces of cover in an area. That could mean finding a couple patches of really thick weeds, some smaller patches of lily pads, or even a stretch of two or three docks all alone on a vacant shoreline. These isolated areas tend to hold larger fish and allow you to work more efficiently then just spending time in a huge weed bed, lily pad field, or stretch of docks. Soft plastics like tubes and creature baits really shine in these situations but make sure to pair them with the proper weight for the situation. If the weeds are really matted on the surface don’t be afraid to use a 1 oz weight to “punch” through the cover, dropping it right on their heads and giving them no choice but to crush it. These fish can be some of the most cooperative of the year because most anglers get frustrated trying to get tiny little weights through the thick stuff. So go grab yourself some braid, heavy weights and a big stick and you’ll be amazed at the fish you’ve been passing up.

Finally, something I have always had a hard time figuring out is why in the world the majority of anglers seem to pack up their rods, tackle and boats come September. To me this is like going to see your favourite band, watching all the opening acts, and then leaving before they ever hit the stage! Some of the best fishing occurs in the fall, so if you’re packed up, you’re definitely missing out. Start your search by looking for areas with the greenest weeds in the lake. With the cooler nights lots of the weeds are beginning to die off and these patches of living grass can be loaded up with giant fish. Around this grass in the fall a flipping jig is a great choice, as its big profile offers, what a largemouth thinks, is a great meal. Also don’t be afraid to look around in super-shallow water, especially on those abnormally hot days. Largemouth will be up taking advantage of the warmer water caused by the sun and are always looking for an easy meal. Cast a Sinkworm around any visible cover especially the hard stuff like wood, rocks, and docks. These will all hold that heat from the sun and in turn the fish will be holding to them like glue.

So, instead of getting caught up going to the same spot and firing the same lures over and over again – try covering some water with lures you might not normally throw in areas of the lake you may have never tried. I’ll bet my boat that you’ll be pleased with the outcome.