Fishing rods have come a long way and manufacturers has been striving to build lighter, more powerful yet sensitive rods for just about every technique out there. Often times people wonder why there are so many lengths and actions and even powers available in the market place but in reality it is no different that golf clubs… for every shot there is a club designed to do it and for fishing the same goes for the rods… cranking, flipping, float fishing and even topwater all require a different power, length and action…after all you wouldn’t want to drive with a putter and putt with a driver would ya? 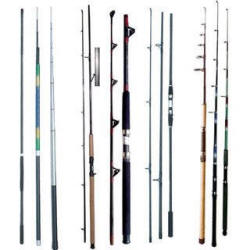 Rod material ranges from fibreglass (heavy and not very responsive) to graphite composites and finally graphite (Light, sensitive and strong). There are several levels of graphite quality on the market and although there is no true control as to quality the numbers have most commonly been referred to as IM or Intermediate Modulus like IM6, IM7, IM8, IM9 and more recently like in the Shimano Cumara line IM10. The other is HM or High Modulus.

Modulus is a term that describes the stiffness to weight ratio of the graphite that’s used to create the rod blank. Here’s how it works….when you cast a lure, the rod flexes with the weight of the lure, storing energy as it flexes. When the motion of the rod stops, the rod flexes and releases all of its stored energy to propel the lure. When you increase the modulus of the graphite, you increase the ability of that graphite to store and release energy. You also increase the speed that the rod releases the stored energy. That in turn, increases the lure speed that is generated in the cast. Increase the modulus and you increase the reaction speed and power of the rod blank.

Below is a general example of modulus ratings using G Loomis classes:

Spline
Since all graphite rod blanks are actually wrapped layers done on a mandrel there is always a thicker side to the blank where the material over laps or starts and ends and that is called a spline or “Backbone” of the blank. This spline will determine the top side of the rod and be used to gauge where the guides will be positioned. On all rods the spline is on the top of the rod.. the difference is guide placement between spinning and casting. Casting rods have their guides wrapped directly onto the spline and spinning rods have them wrapped on the underside… the reason for this is simple… the spline of the rod, which is the strongest side, must always remain of the top side of the flex when fighting under load since it is the natural bend of the rod… if the guides are actually wrapped off of center the rod will twist under load and show the misalignment… rods done like this are bound to break since the weaker side of the blank is taking the abuse.

Understanding a blank’s model number
Understanding the model number on the rod you have chosen will help determine the power, action, length and even model with almost every manufacturer. There are two different ways rod builders do this and the first involves super simple short form letters and numbers that tell you everything about the rod…

The other way model numbers are determined are by using the blank’s length in inches and Power by numbers.
Actual Rod: G Loomis Mossy Back Flipping, 7’5″, Heavy, Fast Action
Model Number: BCFR854

The “85” is the rod’s length in Inches (7’5″) and the last number, “4” relates to the power of the rod. With G Loomis their power chart runs from 0 – 6, which correlates to Ultra Light to Extra Heavy.