Baitcasting reels began as direct drive knuckle busters but have evolved into finely tuned workhorses over the years. Today’s baitcasting reels use technology like disengaging spools to increase casting distance, Magnetic cast control was designed to help alleviate spool over run but the problem with magnetic cast control is the fact that it is always “on” and the higher it is set, the more resistance is felt while reeling as well. The next move was with variable braking systems (VBS) which work on the basis of centrifugal force. The spool typically has 6 pins which can be seated in or out. When in the out position they flair outwards on high speed spool revolutions, acting like a mini parachute, slowing down the spool speed. The more you have out the slower your spool will run and the less over run you will get helping users avoid the dreaded backlash that makes so many anglers put down their baitcasters. 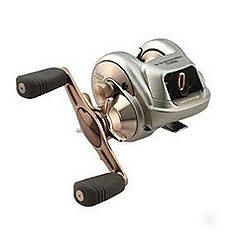 The same features as spinning reels will attribute to a reel’s longevity…. things like sealed anti-rust bearings, aluminium or magnesium frames, machined aluminium spools and durable gearing. The other variable with baitcasting reels is their gear ratio. There are several on the market and often within the same reel model. Common ratios are 5:1 (Cranking), 6.2:1 (General use) and 7:1 (Burning high speeds and flipping and pitching).. the difference within these ratios is simple as it involves the amount of line retrieved per handle turn… depending on the spool size the general numbers are as follows…

Line capacities for baitcasting reels will vary based on their size but generally they are designed to handle heavier pound test lines… monofilament and fluorocarbon from 10-30 pound test and braided lines from 30-80 pound test. The amount they can hold is directly related to the style of reel in which there are two… a Low Profile version which is made for casting smaller baits and most often used in bass fishing and a beer can style Round Baitcasting reel which can be as small as you hand but ranges well into mammoth proportions as seen when saltwater fishing for Marlin. Round baitcasting reels are also very specialized for individual techniques like trolling (Line counters), Casting heavy baits for Musky and Pike and even down rigging.